On November 15, the annual DrupalCamp Baltics event took place in Riga, Latvia. The event, which has been held since 2010, brings together the Drupal community of the Baltic states for a full day during which people get to share their knowledge about Drupal, learn new things about it and come together for collaborations. During this year’s event, ADM Interactive’s analyst Mirko Haavel, who has worked with Drupal for over five years, delivered a presentation on how Drupal has been used to develop the Estonian Government portal. 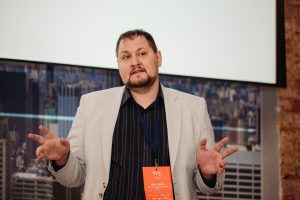 Drupal is a content management system and a very popular platform used for creating bigger websites, intranets and other web applications that have higher requirements for their content management. Drupal’s global community is quite active – they introduce new functionalities to the platform on a regular basis and they do it all for free.

In 2014, the first version of the Estonian Government portal was launched. The purpose of the project was to create one external web platform for as many government institutions as possible. Specifically, the initial main goal of the Government portal was to create a shared visual and functional environment that would merge the websites of the Government, the office of the Prime Minister, the Government Office and the 11 Estonian ministries. The platform is altogether mandatory for 47 institutions who must implement it within a reasonable time frame.

A shared platform meant a shared look – one country with one face! Additionally, this platform helped keep down the overall development costs since instead of needing to invest into the development of separate websites, every institution’s website was moved onto the same platform.

The new portal will include less content types and the ones that are staying will be smarter and will enable the creation of more diverse content. To achieve this, the platform will make use of Drupal 8’s Paragraphs module, which enables the new websites to have various pre-defined components. This will make it easier for content managers to work with more complicated content components.

One of the more important new features of the updated Government portal will be the new, higher-quality search function, which performs a synchronised search across all portals that belong to the platform. This feature will allow visitors to the site to quickly figure out which institution’s website will have the answers they are looking for. The search function also helps create a cohesive overview of the country.

The new platform also comes with an updated architecture. Instead of the current monolithic architecture, the new Government portal will use a multitier architecture, wherein the larger functionalities of the platform have been separated from each other. This change will make it easier for developers to make changes to the platform and to use developments created by others. Overall, using this architecture is much more cost-effective and convenient and it provides the product owner to get a full overview of the platform at any given time.

Government portal 2.0 will also significantly increase cooperation between the government institutions. A new work group has been created for this, which brings together the content managers and technical representatives from the different institutions who have to work with the portal on a daily basis. This work group will facilitate communication and the exchange of ideas between all parties. Every new development plan for the portal will go through the work group first where all parties can then discuss them.

The work group will also facilitate cooperation and the co-financing of new developments between the parties. Once a new development has been finished, it will also be introduced to everyone else.

The current estimated time of arrival for Government portal 2.0 is sometime in 2020.