Kelly Vask, a student from Viljandi Culture Academy won this year’s Battle of the Bands organised by ADM. Vask has been writing and playing music since she was little. 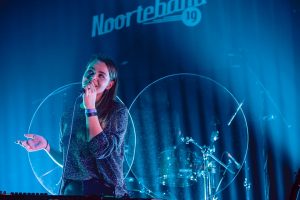 ADM has been supporting Estonian musicians for 10 years now. Every year, they release an album by one winning artist, which is then distributed among ADM’s friends and partners. This year, nearly 50 artists and bands participated in the contest. This number included both established and well-known musicians as well as newcomers in the field.

“It was really hard to decide on just one musician this time around, because we were sent a lot of great demos, more than ever before. We listened to the tracks and deliberated between them for two weeks and finally came to a decision that was hard to make but unanimous – we felt that Kelly Vase’s ambient music fits best with our image,” said Riho Pihelpuu, the CEO of ADM whose love for music was the reason the Battle of the Bands was established in 2009.

Kelly Vask won the Battle of the Bands with her track COLD/GOLDEN, which is a promising and refreshing addition to the Estonian ambient scene and is definitely worthy of being released as a physical CD track.

Music has been a part of Kelly’s whole life. “Most of my relatives, on both my mum’s and my dad’s side, all play some kind of an instrument or sing. For me though, the idea of studying music and doing this on a more serious level came quite late, in the beginning of senior year in high school. But now I am studying in Viljandi Culture Academy and I am already a part of multiple groups where I sing and write music,” said Kelly.

Since the members of Kelly’s own band – Kelly’s Puzzle – are currently studying abroad, she decided to try writing and producing music on her own for a change.

“The weird thing is that I didn’t have a specific plan or anything. I uploaded my first attempt called “GOLD/GOLDEN” onto SoundCloud and it quickly gained over 1000 listens. I liked the track and according to the numbers, so did other people. From there, I went on to the Estonian Band Award semi-final, followed by the finals in November. Participating in ADM’s Battle of the Bands was a bit of a coin toss for me. I figured that if I get the album, that’s great, but if not, then that’s not a big deal either. Overall, I am really happy and honoured that you picked my music from amongst this huge pool of talented people and that you believe in me and my music!”

Some of the previous winners of ADM’s Battle of the Bands include Sander Mölder, Erki Pärnoja, Kristjan Randalu and Vaiko Eplik, Ajavares, Oopus and many others.

“I want to share stories and emotions, so that the listeners could recognise themselves in my tracks. So that the music would be more than just a sequence of notes.”